The Making Of "Div" With Ehsan Bigloo

Designing characters and creatures for film and TV can involve many processes. Ehsan Bigloo, nominated as 'Best Creature Designer' for two consecutive years by the Concept Art Association, presents his tried-and-tested workflow when designing awe-inspiring creatures for the entertainment industry. Developing his own IP, this workshop details the making of Dîv, a demon character with supernatural strength and power that takes on a roughly human shape yet channels dark, supernatural powers.

Beginning right where Ehsan likes to start any new concept, the first chapters detail how he approaches finding the initial thumbnails, shapes, and forms of a new creature using pencils on paper. Sharing thoughtful insights into his strategies as well as how he handles client feedback in the industry, the first segment of Ehsan’s workshop will help change the way you consider concepting your next design from scratch.

After laying down his initial ideas using traditional media on paper, Ehsan takes his chosen concept design into the digital world, taking the initial sketch/concept into a 3D form using ZBrush to block out the model as he works through to the final render using KeyShot. All the while offering his industry tips, tricks, and insights, from his many years of experience working in the entertainment industry as a Concept Artist.

As a bonus chapter, Ehsan takes his final creature into the Unreal Engine to demonstrate, from a designer's perspective, the creative possibilities available to you when you import a character into Unreal and set up some atmospheric lighting.

This workshop is designed for aspiring and professional Character/Creature Designers, Concept Artists, Digital Sculptors, IP developers, as well as anyone interested in visual character-based storytelling. 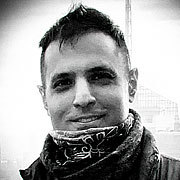 Ehsan Bigloo is a Senior Concept Designer specializing in creatures, characters, armor, and costumes for the entertainment industry. His credits include at least 22 movies and 11 TV shows, including Men in Black: International, IT Chapter Two, Love and Monsters, Dark Phoenix, The Prey, Archive 81, Resident Alien, and Morbius. Ehsan was a Lead Creature Designer on The Lord of The Rings: The Rings of Power and also on the upcoming Kingdom of the Planet of the Apes. In addition to film and TV, he has created concept designs for many AAA game companies, including EA BioWare, Wizards of The Coast, Archetype Entertainment, and Riot Games, to name a few. More recently, Ehsan worked at Aaron Sims Creative as a Lead Concept Artist on projects including the “DIVE” and “THE EYE: Calanthek” short films. He is currently working as a freelance Concept Artist and Visual IP Developer.

Ehsan has an extensive traditional art background in figurative drawing, clay sculpting, and oil painting and specialized in surreal figurative art. He has always loved movies and filmmaking and, growing up in the 80s, it was the behind-the-scenes insights into SFX movies like Alien, E.T., Star Wars, The Thing, and The Terminator that inspired him to become a monster maker.

Ehsan has been nominated as 'Best Creature Designer of the Year' for two consecutive years by the Concept Art Association.