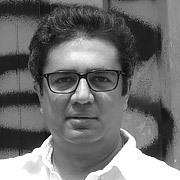 Reza Ghobadinic started his career as a self-taught 3D generalist in the mid-90s. Coming from the computer science background, he was drawn towards FX and Crowds in specific, which he could take advantage of his technical knowledge. In the last 15 years, he has worked at Animal Logic, Weta Digital and is currently the global head of the crowd department at Framestore for the film division. He has participated in digital production of numerous movies including Happy Feet 1 & 2, Avatar, Sucker Punch, Walking with Dinosaurs 3D, Lego Movie, Dracula Untold and Marry Poppins, just to name a few.