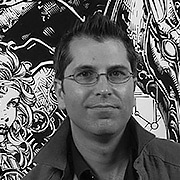 Joe Weems began his professional career straight out of high school working for independent publisher Eros. His work on Vengeance of Vampirella lead to inking penciller Kirk Van Wormer on Chains of Chaos and The Rook, and then eventually some fill-in work at Rob Liefeld's Extreme Studios. Catching the eye of Top Cow Studios in 1996, Joe was paired with Anthony Winn for the new series Ripclaw. Over the next five years he would go on to ink such popular artists as Dave Finch, Brandon Petersen, Mike Turner, Joe Benitez and eventually Marc Silvestri. From 2000-2005 Joe broke out of comics and illustrated numerous skateboard decks and graphics for Darkstar Skateboards. During this time he also worked with publishers Dark Horse, Wildstorm, Crossgen, DC and Marvel Comics before returning to Top Cow and inking Silvestri (whom he continues to work with to this day). When not inking Joe can be found grinding another toon to 70 on Rexxar.