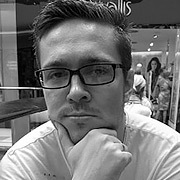 Maciej Kuciara is a Senior Concept Designer and Illustrator working in the film and video game industries in Los Angeles. Some of his recent projects include X-Men: Days of Future Past, The Wachowskis’ sci-fi epicJupiter Ascending and Marvel's Guardians of the Galaxy. Maciej’s clients include Dreamworks, Blur Studios, Universal, Digital Domain, Crytek, Wizards of the Coast and Naughty Dog, where he contributed designs to the five-time BAFTA-winning video game The Last of Us.