Vehicle Texturing in Substance Painter: From Clean to Mean

Welcome to Vehicle Texturing in Substance Painter: From clean to mean. In this workshop, James Schauf walks you through two different projects, each telling their own story. The first is Night Fire; a clean hot rod with slight imperfections. In this project, James demonstrates the creation of key materials and shares his workflow for adding just enough detail to create realistic believability. Upon completing the work in substance painter, maps are exported for rendering in Keyshot. James discusses various tips and tricks for material modifications, camera set-up and using backplates, just to name a few. The second project is the Rusty Scorpion; a mean, mad max inspired, rusty and dusty rat rod. In this project, smart materials are explained in order to understand the importance of gradually building up detail. Once complete, the vehicle is rendered with Iray inside Substance Painter, while James shares his process for final renders. Overall topics and materials discussed include reference, UVs, Look Dev, Leather, Painted Metal, Chrome, Rust, Rubber, Texture Sets, Masking, Decals, HDRs and detailing. For artists that are looking to get a jump start on a new project, over 40 smart materials are shared from both projects, plus a few extras. You'll be able to see the build-up process and breakdown each smart material, then modify them and make them your own. 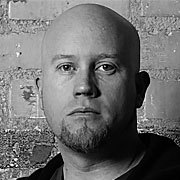 After nearly a decade in the United States Air Force, James Schauf chose to pursue his talents as an artist and became the first veteran to graduate from the Gnomon School of Visual Effects. Since graduating in 2010, he has worked for various acclaimed studios including Legacy Effects, Nickelodeon, Walt Disney Animation, Aaron Sims Creative, Paramount Pictures, Psyop and Apple. His skills as a modeler can be seen in film, games and television, having contributed to award winning projects such as Moana, Big Hero 6, Kung Fu Panda: Legends of Awesome and Iron Man 2, to name a few. James also brings his varied experiences to his work as an instructor at Gnomon.